THE HISTORY OF ZAMPONE MODENA IGP

The products owe their fame to the geographical origin of the places where they have traditionally been obtained. The historical origin of these productions dates back many centuries ago to Modena. They are the fathers of all cured meats containing rind. Later they were also produced in the other regions of central-northern Italy, where the same know-how was handed down and spread the same art of making cured meats of pure pork. 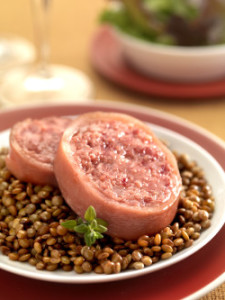 The birth of the Zampone is unanimously traced to 1511.
At that time, the troops of Pope Julius II Della Rovere besieged Mirandola, near Modena: the homeland of Giovanni Pico, a faithful ally of France. By the end of Mirandola’s siege, they were starving. The only thing left was their pigs. Not shooting them down would have been a mistake: it meant giving the pigs as a gift to the enemy whom was already at the city’s gates.
The right idea came to one of the cooks of Pico della Mirandola, “Lets slaughter the animals, and put the leaner meat in a casing made of the skin of its legs. So it will not rot, and we could conserve it. So to cook it later”. And so the Zampone was born. Its original shape consecrated the fortune of this product for the following centuries.

Towards the end of the 18th century in the collective gastronomic imaginary the Zampone Modena replaced (together with the equally famous Cotechino) the yellow sausage which had already made Modena famous during the Renaissance. The 1800 consecrated the large-scale success of the product, as evidenced by the writings of the Roman Gastronome Vincent Agnoletti and numerous literary testimonies.

“If you want to cheer, eat Zampone Modena, it brings joy to a sad soul”.

Nowadays Modena’s Zampone and Modena’s Cotechino entered in our tradition.

Zampone is a classic dish served for New Year’s Eve. This link between Zampone, Christmas and New Year was born as a result of the rural tradition of sacrificing the pig on the day of Saint Lucia (December 13th). Among the pork products eaten in a short amount of time, or between those products that unlike salami and hams do not require a curing process, the Zampone has always been considered a particularly prized dish. It was reserved just for the holidays, accompanied by equally valuable lentils.
The presence of Zampone also on the tables of nobles is confirmed by some traditional recipes which accompany it with the eggnog, a cream that, given its ingredients-eggs, sugar, liqueur wine-, was intended only to tables of the wealthy.

Download the cookbook dedicated to Zampone IGP and discover recipes created by the hotel school students! 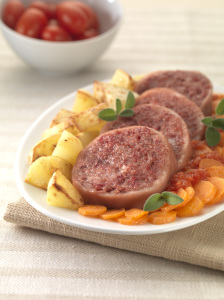