The history of Cotechino Modena IGP

500 years ago in the lands of Modena … The two gastronomic excellences, protagonists on the Italian tables during the holidays and not only, saw the light 500 years ago in the surroundings of Modena. The existence of these tasty products is due to the ingenuity of the people of Mirandola who, to take away the pigs from the invading enemy, they stuffed the minced meat into the pork’s rind and legs: this cleverness which today still allows us to taste these two delicacies.

After 5 centuries, the two famous cured meats are still prepared according to the recipe of the past, but with more guarantees. The PGI certification ensures that the Zampone Modena and the Cotechino Modena are precisely born from the wise blend of meat and aromas used from the distant Renaissance. Zampone and Cotechino are now considered the progenitors of all cured meats containing rind. After their appearance, several similar products appeared also in the other regions of central-northern Italy, and contributed to hand down and spread the great knowledge of the art of making cured meats of pure pork. 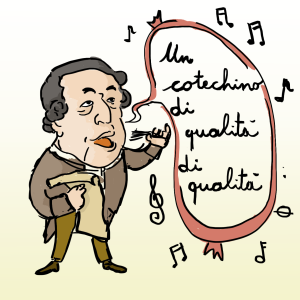 Already famous at the time of the first Italian states as one of the most typical and delicious gastronomic preparations of the Emilia Region, the Cotechino Modena is considered the father of all cured meats. Since then the name of this product went beyond its original territory, in the Duchy of Milan there was a talk of the “coteghin” made in Modena, and also the composer Gioacchino Rossini wrote to Mr. Bellentani, one of the pioneers of the large-scale production of Cotechino Modena, “I would like four Zamponi and four Cotechini, all of the most delicate quality”.

The Cotechino Modena IGP, which many Italians elect to celebrate the end of year, the boiled meat with a delicate and delicious taste.

And there are also many Italians who increasingly choose it in the everyday menu: for its balanced calorie content and the versatility of use, lends itself to becoming the tasty ingredient of simple but original dishes.